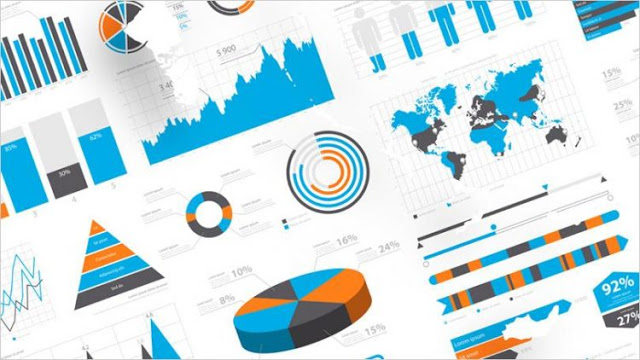 IBM projects a  39% increase in demand  for data scientists and data engineers over the next three years. But employers are coming to expect a familiarity and comfort with data across their organizations, not just from their scientists and engineers.
Because of this trend, we can expect the continued growth of tools and resources geared towards making the data visualization field and its benefits more accessible to everyone.

For example, someone new to the field may turn to Ferdio’s  DataVizProject.com , a compendium of over 100 visualization models. The infographic agency put this resource together to “inform and inspire” those looking to build their own data visualizations. Other services like  Google’s Data Studio  allow users to easily create visualizations and dashboards without coding skills.

2. The increase of both open and private data helps enrich data visualizations.

In order to gain greater insight into the actions and patterns of their customers and constituents, organizations need to turn to sources outside of their own proprietary data.
Luckily for data scientists, more and more data becomes available every day, and we can expect the trend of increased availability to continue into 2018.
Data.gov , the United States Federal Government’s open data site, boasts data sets from 43 US states, 47 cities and counties and 53 other nations. In June,  Forbes identified 85 US cities  that have their own data portals.
We recently published a list of  40 open data projects, from transportation and accountability to performance management and IoT.
The example above visualizes open data about  Cholera outbreaks from WHO using custom iconography and color palette.
In addition to open data sources, new marketplaces, data exchanges such as the new  Salesforce Data Studio  (announced in September 2017) as well as resources such as  CARTO’s Data Observatory , will provide data scientists and visualizers even more opportunities to enhance their data and draw new and actionable insights.

Artificial Intelligence and Machine Learning are the buzz words du jour in the tech world and that includes their use in the field of data science and visualization.
Salesforce has certainly highlighted their use, advertising their  Einstein AI , which will aid users in discovering patterns in their data.

Microsoft has recently announced  similar enhancements to Excel, expected in 2018. Their “Insights” upgrade includes the creation of new data types in the program. For example, the  Company Name  data type will automatically pull in such information as location and population data using their Bing API. They are also introducing Machine Learning models that will assist with data manipulation. These updates will empower Excel users, already familiar with the programs data visualization tools, with data sets that are automatically enhanced.

4. The “interactive map” is becoming a standard medium for data visualizations.

Creating a single data visualization can have great impact. But, more companies are beginning to create custom website experiences that tell a more complete story using many types of data and visualization methods.
Enigma Labs  released the world’s first  Sanctions Tracker  earlier this year, a data story that contextualizes and communicates over twenty years of U.S. sanctions data as meaningful information. Look in 2018 for more custom experiences that use maps and other mediums of data visualization to communicate complex issues.

The color of 2017, according to  Pantone , is “Greenery,” a lighter shade of green conveying a sense of rejuvenation, restoration, and renewal. The long-term color forecast, however, is a return to primary colors like red, green, and blue, colors often appearing in country flags, because  “[i]n complex times we look to restricted, uncompromising pallets.”
Regardless of trends, it’s important to understand the fundamentals of choosing color palettes for your data visualization. Once you understand the fundamentals, you can start exploring other palette options and incorporating design trends. Check out Invision’s post on  Finding The Right Color Palletes for Data Visualizations .
CARTO also offers an open-source set of colors specifically designed for data visualizations using maps, called  CARTO Colors .
It’s important to consider that about 4.5% of the world’s population is color-blind. Data visualization designers especially need to considering building visualizations with color-blind color palettes, like those provided by  ColorBrewer .

7. Data visualizations around current events are dominating the social conversation.

Data visualizations for social sharing will also take a “less is more” approach for the remainder of the year.
Interactive data visualizations, and maps specifically, offer a new format that is great for social sharing. Marketers can quickly build maps using available location data from social platforms or open data portals.
Below, one marketer created a data visualization using Twitter traffic from the  Game of Thrones  season seven premiere and generated thousands of views:
In focusing in on the three main contenders for the Iron Throne, this data visualization quickly and efficiently tells the viewer that Cersei Lannister drove the most twitter activity in the twenty four hours following the premiere. A marketer could do a similar analysis using branded keyword data.

8. Journalists are striking back with data visualizations.

The  Oxford English Dictionary  selected “post-truth” as the word of 2016. Indeed, following the U.S. presidential election, data analysts, and journalists have been on the defensive from opponents labeling their reporting “fake news.”
But 2017 is the year data analysts and journalists strike back with the help of data visualizations.
The editors of the  Columbia Journalism Review (CJR)  released an editorial, titled “America’s Growing News Deserts,” in spring 2017. The article featured the interactive data visualization below that maps the dearth of local newspapers across the country.
Compartir este artículo: